Heterogeneity in the cellular and molecular features of CAR T-cell products contributes to variation in efficacy and toxicity follow treatment with axicabtagene ciloleucel.

CAR T-cell products vary in terms of efficacy and toxicity due to heterogeneity in their cellular and molecular features. Following treatment with axicabtagene ciloleucel (Yescarta; axi-cel) in patients with large B-cell lymphoma (LBCL), molecular response at day 7 might represent an early predictor of efficacy with this modality, according to results from a study published by Nature Medicine.1

Patients who were able to achieve a complete response (CR) to the treatment via positron emission tomography/computed tomography at 3 months of follow-up had frequencies of CD8 T cells expressing memory signatures that were 3-fold higher than those who achieved partial responses or progressive disease.

When sequencing cell-free DNA at day 7 following the infusion, molecular response was found to be significantly associated with clinical response (P = .008). Moreover, a signature of CD8 T-cell exhaustion was linked (q = 2.8 × 10−149) with a poor molecular response within this population.

“When we look at the characteristics of the infused CAR T cells, we found that samples from patients who were less responsive to treatment had exhausted T cells, whereas those who experienced CRs had T cells expressing ‘memory’ signatures,” Sattva Neelapu, MD, a professor in the Department of Lymphoma and Myeloma, of the Division of Cancer Medicine at The University of Texas MD Anderson Cancer Center, stated in a press release.2 “Additionally, 1 cellular signature of T-cell exhaustion was more commonly found in patients who exhibited a poor molecular response, and poor molecular response is generally associated with less-positive, long-term outcomes.”

Patients with LBCL who remain in either CR or PR at 3 months following treatment with an autologous CD19-targeted CAR T-cell therapy have been shown to have better outcomes than those who just achieve stable disease or who progress before this time point. In the context of B-cell leukemia, phenotypes within the apheresis product and CAR T-cell product have been identified as key cellular features associated with response. However, this has not been investigated in LBCL, nor has it been systemically evaluated using single-cell transcriptomics.

Investigators hypothesized that the heterogeneity of these kinds of CAR T products could contribute to interpatient variability in terms of efficacy and toxicity. To evaluate this further, a single-cell analysis was conducted on CAR T cells to evaluate gene expression profiles in cells that had been infused. Investigators collected CAR T cells from infusion bags from 24 patients with LBCL who had undergone treatment. From there, genetic profiles were compared with responses to treatment, as determined via a PET/CT scan 3 months following infusion.

“When we examined the infusion product, we found that a cell population with characteristics similar to myeloid cells, with a monocyte-like transcriptional signature, was associated with development of high-grade neurotoxicity,” Michael Green, PhD, an associate professor within Department of Lymphoma and Myeloma, Division of Cancer Medicine at MD Anderson Cancer Center, added in the release. “Detecting these cells may subsequently lead us to identify patients who would be at higher risk of developing neurotoxicity, allowing us to provide prophylactic treatment with agents that target the specific cellular features.”

These findings provide insight into patients who will either experience poor outcomes or TRAEs with CD19-targeted CAR T-cell products, allowing for treatment adjustments to increase efficacy and reduce toxicity.

“This study also tells us that some rare and unexpected cells identified by single-cell analysis could be biologically important,” Linghua Wang, MD, an assistant professor within the Department of Genomic Medicine, Division of Cancer Medicine at MD Anderson Cancer Center, added in the release. “Going forward, we plan to functionally characterize these monocyte-like cells to better understand their specific biological mechanisms driving these clinical results.” 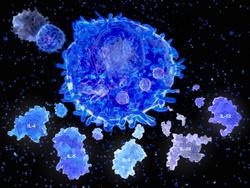