Gene therapy approaches that target DNA have been proven effective for a range of genetic disorders; however limitations in therapeutic delivery and targeting have been challenging to overcome. Taking a more nuanced approach, Locanabio is instead focusing on RNA--specifically RNA-binding protein systems that can modify dysfunctional, disease-causing messenger RNA.

In an interview with GeneTherapyLive, Locanabio chief executive officer James Burns, PhD, discussed the company's unique approach to treating genetic diseases, its advantages across different disease types, and which targets they're currently focusing on in the pipeline. Watch below.

James Burns, PhD: Locanabio is doing another variation on the theme in some ways in terms of targeting RNA for treating disease, but it's also very different. The way that we like to think about this is that this isn't just a new tool as a genetic medicine, it's actually a new toolbox. And the reason for that is that our approach, which is very different from what others have done, is delivering RNA-binding proteins. So the proteins themselves bind to the dysfunctional RNA, and then we can manipulate that RNA in different ways. We engineer these RNA-binding protein systems so that they can either destroy dysfunctional RNA, they can enhance translation of RNA to make more protein, we can affect splicing patterns, for example, we can exclude axons for treating some diseases. And because some of our systems are so small, we can actually destroy dysfunctional RNA and then also incorporate a normal gene and replace it. So it's different from that perspective, in the number of ways our system can actually manipulate dysfunctional RNA. The other thing that's different about what we're doing is, by using gene therapy, we can deliver these proteins in a one time treatment. So we're combining really validated approaches of targeting dysfunctional RNA in a different way with RNA-binding proteins, and delivering it with gene therapy, which we know in many instances can actually work quite well. The other thing that we're doing, which is different, is actually targeting RNA instead of DNA. So you can think of this as genetic engineering, and most people think genetic engineering is targeting gene editing and targeting the DNA. But what we're doing is actually targeting RNA and not the DNA. Finally, the other thing that we do which is very unique is that we can target the mutant allele that is causing the disease and we leave the normal wild type alone, which has tremendous advantages depending on the disease.

One of the big challenges with AAV delivery, is manufacturing, and that's one of the reasons why we've actually invested in manufacturing and a process development and analytical development group, almost from the very beginning, to make sure that we had that capability in-house, and to really understand the processes that we will ultimately use for making our viral vectors. And at the same time, also looking at partnering with experts in the field. You'll also notice from our portfolio that we're also looking at local delivery of AAV for many of our applications, not exclusively, but that is a big part of our portfolio. And that helps us also reduce the amount of material that we need to make, as well as the amount of material we need to administer to a patient. It's not to say that that could still be a challenge or problem if you're delivering it systemically, and it can and I think we've seen that in the literature recently, but our approach is also very potent. We're not just delivering proteins where you have to replace a protein so you want to get more and more and more, we're actually targeting what's toxic. We're targeting directly the toxic RNA, so we need less material that we have to administer; in some ways it's more potent because of the way that we're targeting the RNA. So the doses that we see that we're ultimately going to use are going to be probably an order of magnitude less than you would for other systemic gene therapy trials where you're wanting to replace genes. There are advantages of for AAV that is very important for us, which is that you're able to target tissue and we know that there are serotypes that are very good at targeting muscle or the back of the eye, or even neural tissue. So we're going to be always looking at how to improve on our viral vectors, but there's clearly advantages with the serotypes that are there that we can leverage and that's what we're doing for initial indications.

There are three areas that we initially like, and there were probably they will be more as we show proof of concepts in these areas. CNS applications are very interesting for us. So neurodegenerative diseases, such as Huntington disease, genetic forms of ALS, and there are many others. We also like neuromuscular diseases for a number of reasons, and one of them is that there are a number of what are called repeat expansion diseases that we can address with our system. One of the biggest ones and in terms of impact on the patients, as well as number of patients, is myotonic dystrophy type 1. So that's an area that we like quite a bit. And then also the back of the eye, retinal diseases. There are a number of retinal diseases that our approach has some very unique advantages for, and that also allows us to have local delivery both for the CNS, as well as for the back of the eye. We like those not just for the devastation of the diseases, and they need to have some cures, but also they are local deliveries and that has certain advantages as well.

The myotonic dystrophy type 1 was the first reduction of practice for our approach. And that initial work was done at the University of California, San Diego by Gene Yeo, PhD, our scientific founder, and he was able to show in a form of a RNA-binding protein that comes from CRISPR-Cas9, that you could target that disease-causing RNA that causes myotonic dystrophy. And we actually took it a little bit further, he showed that in vitro and ex vivo studies, and we actually were able to show in an animal model, a very severe animal model of myotonic dystrophy type 1, that we could reverse not only the molecular markers of the disease, but also the phenotypic or the functional markers of the disease as well. And that is pretty exciting. The fact that you can reverse not just what you see at a molecular level, but also the phenotype of the disease itself, in an animal model.

What we're doing much like we did with myotonic dystrophy type 1 is that we're establishing in vivo proof of concept in Huntington disease, as well as diseases of the back of the eye. And our plan is that little bit later this year that we would initiate IND enabling studies in one or more of these disease areas. And we hope that within 12 to 18 months of initiating those studies that we'd be filing an IND with the FDA to initiate human clinical trials. So we're still about a year and a half away from that point, but we're the team is really making great progress in a number of disease areas. 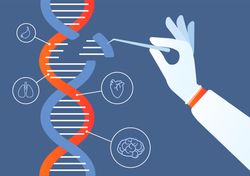